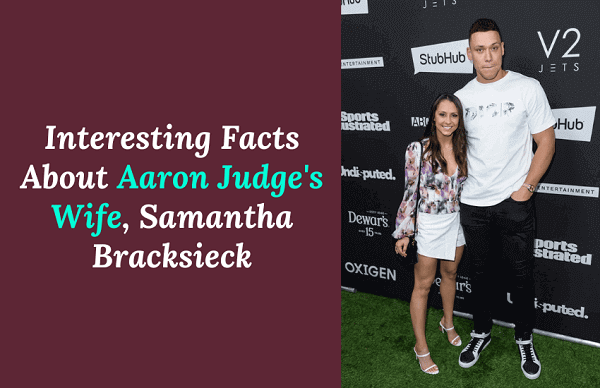 As MLB picks today would predict, Judge hit his 62nd home run at Globe Life Field, setting a new record. His wife, Samantha Bracksieck, closely followed Judge’s home run pursuit. The couple had kept their relationship discreet, but Bracksieck could often be spotted with Judge’s parents in the stands, cheering him on and sharing post-game embraces.

Judge and Bracksieck were filmed walking hand-in-hand to the press room. After tying Maris’ record, Judge told the New York Post, “My wife has been with me through it all, and she’s calm as a cucumber.” Bracksieck was there when he smashed the record days later.

Who is the mystery woman supporting Judge as he makes baseball history? Read on as we explore all there is to know about Samantha Bracksieck, Aaron Judge’s wife, right here.

She and Judge Met in High School

In 2017, Bracksieck was given an award for her master’s thesis in Kinesiology while she was a student at Fresno State. Her award-winning project, “Posterior Elbow Angle During the Movement Phase of Throwing in Relation to the Susceptibility of UCL Injury in Major League Baseball Players,” looked at elbow ligament injuries in Major League Baseball.

She and Judge’s Relationship Tracks Back to 2014

While Bracksieck and Judge like to keep their connection private, Judge did post a photo of Bracksieck to his Instagram in November 2014. The pair and Judge’s parents were captured in a photo collage running the 5K on Thanksgiving Day.

“What a time we had out in LA for the All-Star break! I can’t thank Yankee fans and all the fans out there for their support and for making this one of the best years yet! Time to get rolling in the 2nd half!⭐️⭐️⭐️⭐️,” Judge wrote along with the series of photos.

Except for that one post from 2014, Bracksieck is almost never on Judge’s social media. She has only been on his Instagram page once before, in July 2022, when they were in Los Angeles for the MLB All-Star Break.

The Daily Mail reported that Judge and Bracksieck wedded in a private ceremony in Maui, Hawaii, on December 13, 2021. Photos showed the couple saying their vows at the Montage Kapalua Bay Resort under an impressive arch of flowers and greenery. Judge wore a classic black tuxedo, while Samantha wore a form-fitting dress, an illusion neckline, a detailed back, and a long veil.

She and Judge Enjoy Other Sports.

Bracksieck and Judge keep their relationship private but are often seen at sporting events. They sat courtside (beside Trevor Noah) for the NBA Playoffs in April 2022. In September 2022, the couple attended the U.S. Open after Judge’s 54th home run.

The duo was photographed at Super Bowl parties in Miami in 2020 and a Fresno State game in November 2019. Judge cheered for Bracksieck at the 2022 New York City Marathon. Photos spotted the couple hugging after she crossed the finish line.

Bracksieck and Judge volunteer together. ABC 30 reports that the couple visited people living with adolescent cancer in Fresno in November 2019. The two were seen laughing and joking with patients during their visit.

Judge’s hospital visit was part of ALL RISE. Judge’s 2018 organization aims to inspire kids to be responsible citizens through leadership initiatives, grants, baseball camps, and more.

Samantha is undoubtedly Aaron’s biggest fan, as she has kept a close eye on his beloved home run chase. While the couple keeps their relationship from the media’s eyes, we are certain theirs is healthy and blissful.