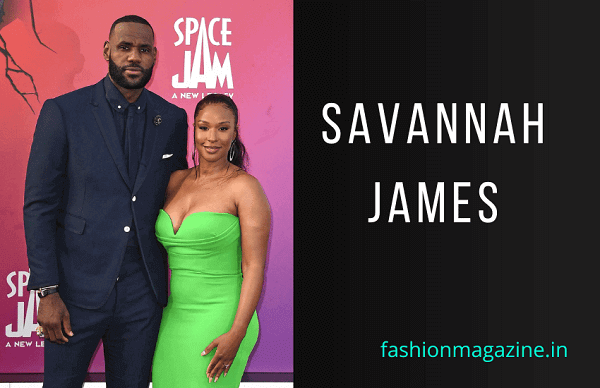 NBA star LeBron James has said that he’d be nothing without his wife Savannah around several times. By the way, he talks about her; we can see a healthy, beneficial relationship between the two celebrities.

Like NBA picks today, we’ve curated all the valuable information about Savannah James, including that she’s a philanthropist and businesswoman. Could you guess that the famous couple met in high school?

Read on as we explore valuable information about Savannah James:

They Met as Teenagers

In 2018, Savannah James told Cleveland Magazine that she met LeBron as a 16-year-old high-school sophomore. She said he’d asked a friend for her number, but she’d decided to collect his. Lebron was a year ahead in a rival school.

“One day, I was sitting around – I was probably bored or something- and I’m like, “Oh, I forgot! I have this number for this guy I can call. He seemed interested, so let’s see,” said Savannah. Later, Lebron would invite her to one of his basketball games, pairing up with friends to go to Applebee’s afterward. A few weeks later, they would go on their first solo date.

Savannah could quickly tell it was love, as she told Harper’s Bazaar in 2010: “I knew he loved me when I forgot my leftovers from dinner in his car. I’d forgotten about them before he brought them to me. I think he just needed another excuse to come and see me.”

Savannah is the Mother of his Three Children

During her senior year and Lebron’s rookie year in the NBA, the couple had an unplanned pregnancy with their son, LeBron “Bronny” James Jr, who was born on the 6th of October 2004. The experience was challenging, as she recalls thinking, “What am I going to tell my parents? What’s going to happen to his career? I was very scared, and I was bawling”

The NBA star stepped up to the situation, telling her, “It isn’t going to slow me down, and it isn’t slowing you down either.” We can still keep doing what we have to do.”

She Dislikes the Limelight

Although she’s married to one of the world’s biggest NBA stars, Savannah James dislikes the fame. “It’s kind of weird. I have always just been in the background. Now that paparazzi and magazines are taking pictures of me, it feels strange. I didn’t think it would come to this point, but I was mistaken.

We saw those sentiments when she spoke to Cleveland Magazine, saying, “When you want me to be on a T.V. show or walk on the red carpet, I can definitely get a little clammy. That’s out of my comfort zone.

In 2017, Savannah James launched Women of our Future, a mentorship program that provided one-on-one counseling and support for young girls in Akron. She also spoke at the Akron Community Foundation “For Women, Forever” event and earned an honorary chair for YWCA Greater Cleveland’s Circle fundraiser.

Since 2013, she has provided the annual I PROM-ise Makeover event, giving local Akron students the opportunity to win free prom clothes and accessories.

“I’m still very private,” she said to Cleveland Magazine. “But these things reflect the passion I have as far back as giving back and the philanthropic part of me. Regarding those things, I don’t mind stepping out.”

Savannah is Lebron’s Pillar of Support

LeBron has consistently praised his heartthrob over the years to anyone who would listen. He reportedly told Harper’s Bazaar in 2010, “A person like me needs a great sidekick and a person you can safely rely on no matter the circumstances. And Savannah is that. She has got my back, and I love her for that”

LeBron openly celebrated nine years of his beautiful marriage by posting an image of himself and Savannah from a Vanity Fair photoshoot. He captioned the picture, “P.S. YOU SO DAMN SEXY! WOW’, with drooling and heart emojis.

It is safe to say the relationship is a safe space for both celebrities to express themselves with love and enjoy each other’s company.